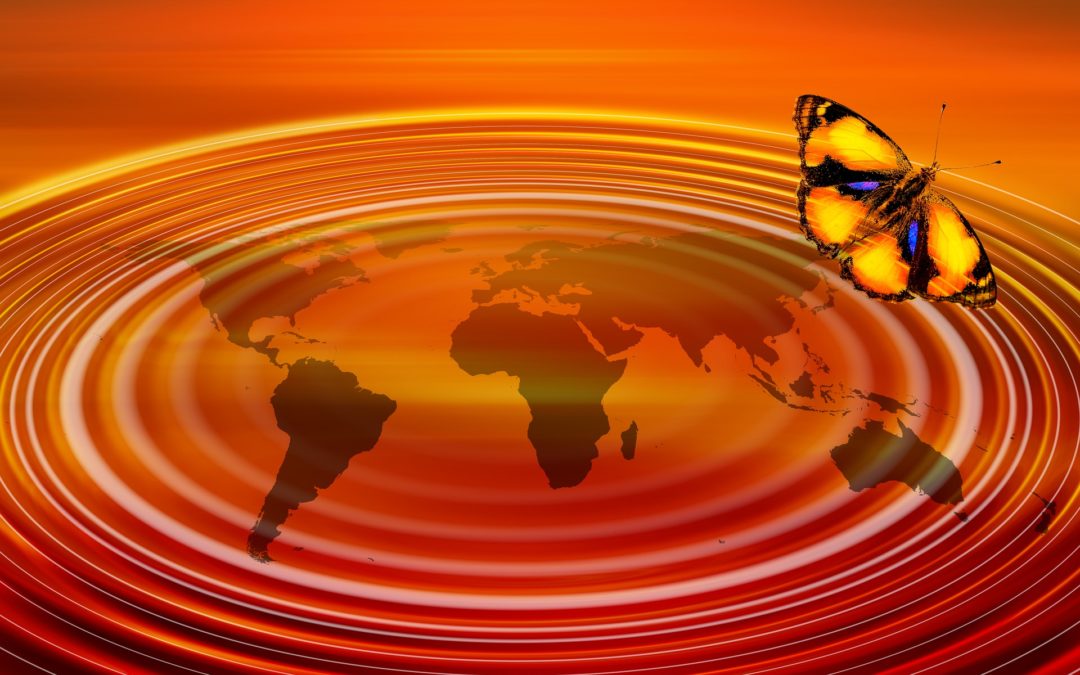 “It is sometimes said that the flapping of a butterfly’s wings in one part of the world can cause a hurricane on the other side of the globe.”
This quote comes from the 2004 film The Butterfly Effect and is inspired by a theory taken up and debated in numerous areas.
Once again, as happened for the War of the Worlds: the inspiration comes from a science fiction novel, it is in fact Ray Bradbury who in his Sound of thunder attributes to the proper death of a butterfly during a journey through time, a variation of future events:

Eckels felt himself fall into a chair. He fumbled crazily at the thick slime on his boots. He held up a clod of dirt, trembling,
“No, it can’t be. Not a little thing like that. No!”
Embedded in the mud, glistening green and gold and black, was a butterfly, very beautiful and very dead.

Another coincidence, also in this case the story was broadcast by the BBC in 2011: here if you want to find the podcast (butterfly from about 35 minutes but I would advise you to listen to it all if you have time).
The butterfly symbol was taken up by Edward Lorenz, mathematician and meteorologist professor at the Massachusetts Institute of Technology in his 1963 paper for the New York Academy of Science and later in a 1979 lecture that went down in history.
In general, the butterfly effect belongs to quantum physics and more precisely to the basis of chaos theory.
Chaos is the most congenial aspect to me, but actually I didn’t want to talk about this … not this time, at least.
Antonietta Gatti is perhaps known to most as “the wife of” despite her respectable curriculum. Her skills add up over time, and I would list, almost a bit to summarize, this recognition: she has been awarded the title of Fellow of the International Union of Societies for Biomaterials Science and Engineering for her contribution to the progress of science. The various national societies of biomaterials and bioengineering have tens of thousands of members worldwide and the union of the various companies has elected Dr. Gatti to be part of the elite of scientists that consists of 32 members, and she was part of a parliamentary commission of inquiry as a responsible consultant. I know, difficult to read, but I found her report very interesting, perhaps because I live in a highly polluted area: here the mortality rate from tumors is terrible:
She deals with nanopathology or pathologies induced by micro and nano-sized particulate exposures, i.e. powders with dimensions less than 100nm (0.1 microns) but her research has become difficult due to the reduced availability of a suitable microscope.
Her flapping wings has not changed the world yet, but she has been able to reach the hearts of people who have made it possible to buy a new electron microscope with their donations.
Let us not stop at the fact that individually we cannot make a difference, let us not stop flying lightly on the difficulties, each of us can be the butterfly of change, let’s believe it, and do not let ourselves be crushed in the mud.