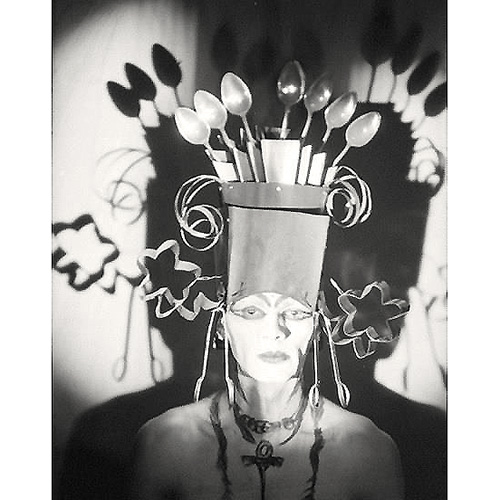 In all my boundless ignorance, I did not know the Dadaist Baroness until BurnazziFeltrinaArchitetti told me about her regarding what I had written on Chester Bennington‘s tattooed ring, pointing out that her wedding ring instead was a bolt picked up from the road.

Art “to wear”, body art to the point of making the concept of transformation three-dimensional which is also realized in the continuous and constant evolution of Elsa Hildegard Plotz, then Elsa Endell and finally Elsa von Freytag-Loringhoven.

Impossible to conceive of seeing her with a trivial mug. She distorts the use of the most common objects, adorning them.

Therefore spoons enrich a headdress as much as a bird cage the neck. Trying to describe her, I would like to bypass the famous phrase that recurs in the various references concerning her, pronounced by the one who appropriated the idea for the Fountain work.

I would rather quote the words of Djuna Barnes, according to Michelle Feda‘s analysis

… in the Village. One may encounter many things, many people. One may even meet the Baroness leap lightly from one of those new white taxis with seventy black and purple anklets clanking bout her secular feet, a foreign postage stamp— cancelled—perched upon her cheek; a wing of purple and gold caught roguishly up with strands from a cable once used to moor importations from far Cathay; red trousers—and catch the subtle, dusty perfume blown back from her—an ancient human notebook on which has been written all the follies of a past generation.

Words that well illustrate corporality.
Words that offer all-round aspects: colors, sounds, scents.
“The follies of a past generation” in open contrast with the present of an artist who is already a future, even for Dadaism.

But as often happens for such controversial and unconventional characters, life is a rollercoaster ride even steeper than usual, both for the climb that touches the golden world, and for the sudden descent that sees difficult moments. inexorably chase each other.

The village is where the friendship between Elsa and Djuna was born: Greenwich Village. A friendship that never ends even in the face of adversities that cancel the rise: it is Djuna who helps Elsa in various ways until her death in Paris, “her last joke”.

But their intense exchange of letters remains.