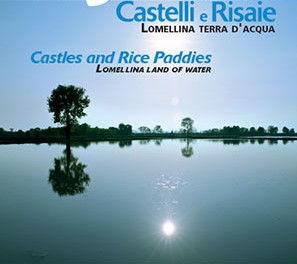 According to the annual report published by the National Rice Authority, Lomellina and Pavese are confirmed as the area with the greatest extension of rice paddies.

“The checkered sea” as my cousin used to say when we were children… yes, here we are quite far from the sea and therefore we are content to find beauty with alternative visions.

The checkered sea or rice paddies.

Paddy fields but no laughter.

Or, quoting neorealism, bitter rice since the conditions of livability, or should I say mortality, due to high rate of cancers, certainly do not allow smiles.

I don’t get tired of periodically reiterating the high danger of the poisons we live with, because the damage they cause to the body is terrible.

But as Charlie Chaplin taught us, a day without laughter is a day wasted.

So if the smile is still a little difficult, I would say to start at least with rice.

The most typical recipes of Lomellina, to stay on the subject of rice fields… mention among the first risotto with frogs …

But I would “jump” directly to something else like the simple ris e lac: rice with milk or risotto with black-eyed peas.

Or, better still: why not take a longer jump outside the borders of Lomellina?

The caustic misanthrope proposed a tartare with Nero rice which to describe as delicious is few, and then she also told me about red rice!
I am a mess so on the first try I got the cooking time wrong but … you learn by making a mistake!
Thanks Lu!

Also on Paola’s blog: Primo non sprecare – First don’t waste, which I advise you not to miss, you will find a long series of recipes for cooking rice enriched with valuable advice, and they are one more interesting than the other!

I don’t know if I can choose, and you?

How about: can we dare a Keep Calm version?
Proposals are accepted!

There are
85
Days before Christmas